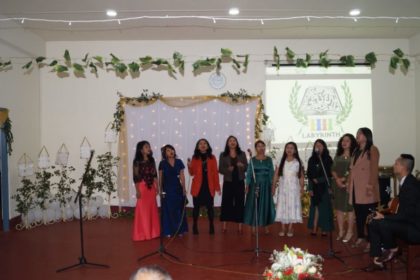 The mega event of a week long celebration of games and sports, culture, and an endless creativity and showcasing talents of the student- teachers of College of Teacher Education- PGT, Shillong, were embarked in the College Week Celebration, 2019. The opening ceremony began on the 18th of October, themed “Rainbow Day” at 2:30 PM, with the hoisting of the college flag in the college campus, followed by the unveiling of the College Week Theme, which is, “LABYRINTH ” 2019 by the Principal Dr. Mrs. V. Kharmawphlang, in the Main Classroom. Later, the names of the teams, their captains, vice- captains and mottos were revealed, with each team carrying a placard of their respective team’s logo and motto. The names of the four teams were House of Zeus, House of Athena, House of Poseidon and House of Nike.

Activities Organised by the Different Committees

The Sports committee and the Socio- cultural committee organized different activities with the help of members belonging to their respective committees and volunteers from both the 1st and 3rd Semester student- teachers.

The college week “LABYRINTH ” 2019 kickstarted on the 18th of October 2019,themed “Tracksuit Day” with Marathon at 6:00 AM, followed by Rangoli Competition  and Flower Arrangement at 9:00 AM in the college campus. Later during the day, the various indoor activities, such as ludo, draught, Chinese checkers, carom board, table tennis, arm wrestling and musical chair were conducted by the sports committee in the college campus.

On the 21st of October 2019, themed “Jersey Day”, the sports committee conducted the various outdoor activities and the venues were at the North Eastern Hill University Football Ground and Basketball Ground, Mawlai Mawkynroh. The activities conducted on this day were the Inter Class Football Competition, Tug of War and Basketball Competitions, between the 1st and 3rd Semester student- teachers, held from 9:00 AM onwards.

On the 22nd of October, 2019, the socio- cultural committee organized the Singing Competition, Instrumental Competition and Dancing Competition. The theme for the day was “Music Day/ Jeans Day. The various activities were conducted in the main classroom from 9:00AM- 4:00PM. All the participants for the various competitions took part with great zeal and excitement.

The last day of the College Week, themed “Formal Day”, that is, the 24th of October, 2019 is graced by the presence of our honorable Chief Guest Shri. Debasish Choudhury , Controller of Examination, NEHU.

On the whole, the College Week “LABYRINTH ” 2019 was a huge success only out of sheer dedication, team participation, cooperation and sportsmanship of all those who were involved in the various activities. I, on behalf the Students Council, would like to end by saying:

Winning is not everything. It only means we are willing to go longer, work harder and give more than anyone else. Winning does not always mean being first, winning means we are doing better than what we had done before.