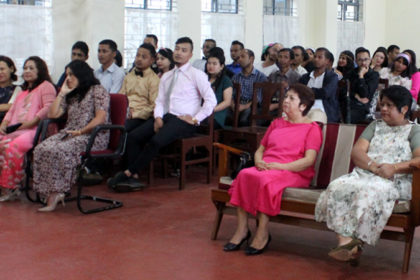 Mahatma Gandhi’s 150th Birth Anniversary was observed and celebrated across the nation with prayer services and tributes on the 2nd of October. This significant day was acknowledged at the College of Teacher Education (PGT), Shillong as well, with the teachers, staff and students coming together to remember the great man, Mohandas Karamchand Gandhi, the Father of the Nation.

The Government, in order to tackle the crisis that is Climate Change, has attached the aim to eliminate the use of single-use plastic in the nation with the observance of Gandhi Jayanti. Keeping this aim in mind, the college principal, Dr. Vanessa Kharmawphlang, led the entire college to take the pledge of minimising our dependence on single use plastic in our independent lives, and to devote at least 2 hours a week of our time to acts of cleaning the spaces that we occupy. This small yet significant action taken today will be reason for a cleaner and greener tomorrow.

The attention of the gathering was then placed on Mrs. F Marbaniang who enamoured everyone present with her in-depth knowledge of history. She gave a brief introduction about Gandhi’s life and struggles and the relevance of his ideals and teachings even in today’s challenges. The particular form of non-violent resistance, Satyagraha or the truth force, was also mentioned by Mrs. Marbaniang. She encouraged us to speak our truth despite evils acting as hurdles, and that eventually, with our truth, it will take us to greatness.

The 3rd semester student – teachers presented a poster exhibition on the events led by Gandhi that ultimately led to the achievement of our nation’s independence. The exhibition covered the topics of: The Champaran Indigo Movement (1917), the Non-Cooperation Movement (1920), Boycott of Simon Commission (1928), Breaking the Salt Law (1930), and the Quit India Movement (1942). The exhibition was presented in chronological order and it was thorough and very detailed.

The programme came to a close with an energetic and patriotic singing of the national anthem by the gathering.

Thus, the College of Teacher Education (PGT), Shillong, revisited and instilled in the audience the values, ideals and the courage of our dearest Bapu, and hopefully, the student – teachers will carry forward this light that they ignited in today’s humble observation.