The College of Teacher Education had a symbolic and significant morning on the 15 th of August, 2019
observing the Independence Day of our nation.
The college programme was hosted by the very pleasant MC Miss Dasiewdor Kharlor who ensured
all that were present were duly acknowledged. After the initial introductions were complete, the
podium was graced by the Principal, Dr. (Mrs.) Vanessa Kharmawplang, who gave an invigorating
speech that instilled in the students, the teachers and the non-teaching staff, the spirit of patriotism
and national pride. She encouraged us to seek greatness not only for ourselves but for our
motherland, India. Her speech was concluded by recognising the impossible efforts of our great
freedom fighters without whom we would still be perhaps shackled to the British Empire.
The hoisting of the National Flag by the Principal was followed soon after. It was solemn affair with
the fragrant flower petals raining down as the flag unfurled. The national anthem was sung led by
the 3 rd Semester students.
A short speech was delivered by Miss Kimberly Watre D’Brass Momin, in which she addressed the
present-day realities of our country. She discussed how the mental health of the nation is crumbling
and needs immediate attention if we wish for our country to soar. She also discussed the rampant
misogyny present in our society which is curbing the freedom of nearly half the population – the
women folk. She urged the solution for these evils lie within us, the teachers of today and tomorrow
– and that with the right teaching and attitude, light will overcome darkness.
Miss Kimberly also acknowledged the democratic violation that is occurring in Kashmir with the
removal of Section 370 and Article 35A from the state, and how the freedom of speech, expression
and protest is being extinguished by the present Government on the people of Kashmir.
As Senator Mike Gravel stated, “There is nothing more patriotic than being a good-hearted critic of
our country. If you want your country to get better, you should call it out on its failures – to refuse to
do so isn’t love, it’s idolatry.”
Ma’am F. Marbaniang then took the gathering on a walk down history lane and showcased a
PowerPoint Presentation on the chronological order of how our freedom was achieved. The poem
‘Freedom’ by the wise Rabindranath Tagore was recited as well. “Freedom from fear, Freedom from
the burden of the ages, the shackles of slumber… Freedom from the insult of dwelling in a puppet’s
world” – echoed through the halls of the college. The presentation humbled all those who witnessed
it, as it made us realise the hardship and the efforts put in by the fathers and mothers of which this
country was born.
An inclusive prayer was offered by Father Roby Mathew that made the gathering contemplate about
each and everyone one of us who exist in this country – the Dalits, the Muslims, the ‘untouchable’
scavenger working class, the Adivasis, the women and children, the poor, the athletes to highlight a
few. The prayer is an excerpt from the book ‘Newsman’ by Rajdeep Sardesai titled ‘A Prayer for India
in 2019’. It deliberates that “secularism is about plurality and mutual respect, where communal
harmony is about celebrating Diwali, Eid, Christmas, Nanak Jayanti with equal fervour.” and “where
our politicians realise they are meant to serve not rule us, where a people-centric leadership
realises that humility matters more than egotism, where netas learn to accept mistakes, where
parliament puts national interests above competitive politics, where anti-corruption watchdogs are
autonomous, where strong institutions matter more that shallow individuals”.

A lovely medley was performed by the 1 st semesters soon after. The medley consisted of an English
song, a Pnar song and a Hindi song, which was completely apt considering the diversity within our
state as well.
The Vote of Thanks was offered by Miss Maysalin Pohchen. A special round of appreciation was
given to Miss Maysalin for this task, as she struggles with public speaking, and so this rather easy
task (for some) was a herculean task for her, and she overcame it with graciously.
Thus, the Independence Day celebrations concluded with smiling happy faces all around, and they
were lit even further with the catering of light refreshments provided by the college.
In the end, hopefully, the spirit of patriotism echoes within all of us even beyond August the 15 th , as
true patriotism isn’t just about standing when the national anthem is being sung, but standing up for
what is just and right. 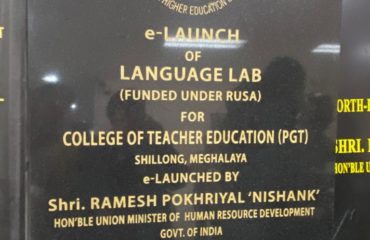 E-Inauguration of the Language Lab